In Search of Poetry by Richard Murphy

W.B. Yeats saw it in dramatic terms. The artist’s choice is between perfection of the life or of the work. There is it seems no half-way house. Either way there is a price to pay. In this most moving book, Richard Murphy presents us with a veritable anatomy of the Yeatsian dilemma. Here is poetry in the making, along with disturbing collateral, told with unflinching honesty.

with ‘A Brief Introduction’ by John Burnside

. . . a discourse on dwelling that is much-needed for our time. From his own dwelling places, to the mystery and sanctity of the dwellings of others, to the sense that all of us who have at some time been unhoused must retain of human homelessness, Murphy makes us feel the beauty, fragility and depth of home.

Richard Murphy’s tone is painstakingly honest and also melancholy and beautifully uncertain. It is fascinating to observe how a poem emerges, as though it were a building, and to read the story of a rich sensibility in the making.

In Search of Poetry presents a series of journal entries, verse experiments and finished poems, written as Murphy worked in search of the sonnet sequence that would give its name to his fourth collection The Price of Stone (1984). With one exception, ‘Natural Son’, the sonnets are written as if spoken by a series of buildings. These range from the big house of the Anglo-Irish landowner to the makeshift roadside shelter of the Irish traveller – from lead-mine chimney, rural schoolhouse, cruel reformatory, and English Cathedral school to idyllic childhood home and ascetic island dwelling, with here and there on the skyline a phallic folly, an imperious column marking British rule.

As John Burnside shows in his introduction ‘belonging’ and ‘home’ are profound and tender watchwords in this book – a work that is, as Colm Tóibín has remarked, ‘beautifully uncertain’.

Richard Murphy was born in 1927at Milford, near Kilmaine, Co. Mayo. His father served in the British Colonial Service, in for a period what was then ‘Ceylon’, where the poet spent part of his childhood and where he now lives. Murphy was educated at an Irish boarding school and at Canterbury Cathedral School, where he was a chorister. He won a demyship, at the tender age of seventeen, at Magdalen College, Oxford, from which he would run away, in search of poetry in the West of Ireland. His debut collection of poems Sailing to an Island (1963), published by T. S. Eliot at Faber & Faber, was a great success. It is a foundational text in a significant archipelagic turn in Irish and British writing. There followed the powerful The Battle of Aughrim (1968) which includes a no less important post-colonial sequence ‘The God Who Eats Corn’, a work that, with its sharp critique of empire, caused his father great consternation and distress at what he saw as betrayal. A return to the archipelagic came with High Island (1974) which was followed in 1985 by The Price of Stone. A volume devoted to celebrating Murphy’s achievement, edited by Ben Keatinge, is due next year from Cork University Press who have also reissued Murphy’s The Kick : A Memoir of the Poet (2017). 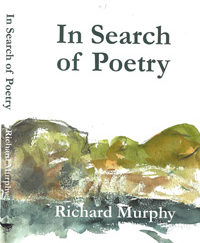 You're viewing: In Search of Poetry by Richard Murphy £15.00
Add to basket