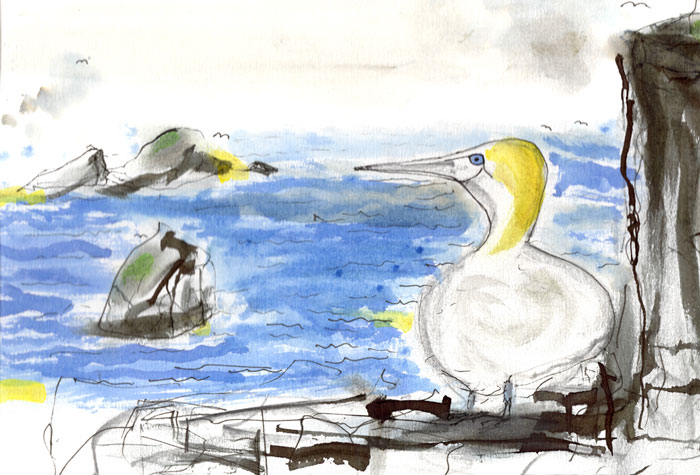 I should have asked my friend the gannet before I set out, for a gannet’s eye view of the chances. But it was not to be and I knew it in my heart. I knew it in my bones as I stepped off the plane in Steornabhagh (21 May), though I took everything I could as a ‘sign’ to the contrary. My plan was to explore Lewis and then go south to join a party of friends (old and soon-to-be) at Tairbeart on Harris in readiness for the word from Angus Campbell to haste ye to Leverbrugh and embark. It was not to be. I knew it literally in my bones next day as I walked in a bitter northerly, lashed by sleet and hail, the two or three kilometres from Port Nis to the Butt of Lewis, the buffets enough to stop you in your tracks. I staggered on into the brunt like a man coming home late from the pub in the old days. I had not seen the Butt before. As I went along I joked to myself as to what it might be to merit the walk on such a day. I thought of a grouse butt for coastguards to peer from through their telescopes. But then I saw my first sign of beneficent providence, a little flock of Snow Buntings doing what they could to hold their own along the cliff-top. Next an Arctic Skua crossed westward at eye-level just in front of me. I had never seen either species before. I pinned my hopes on them and bade those hopes stand fast like the Butt of Lewis Light itself.

The next day, despite high winds and strong bouts of rain, I fished for trout in the only remotely sheltered corner of Loch Acha Mòr and caught four brown trout on a Black Pennell fly, as recommended to me by the man in the fishing shop. It was a fly I had in my box, a stand-by in my native North Wales too. I would have felt safer with three fish, but four would do. I had signs in abundance. All would be well. We would reach St Kilda. Though the cuckoo on the hill and called me a fool countless times.

On the Saturday I drove down early for Tairbeart. A loch on the left of the road took my fancy and I decided to stop and cast a fly at it. It was a bleak day but the water seemed in great condition. I fished without success for an hour and more, by now some distance round the first bay when I heard shouting and, looking up, saw two men, the bigger of them waving his arms, and calling ‘NO FISHING! NO FISHING!’  I hurried round to them having shouted back my apologies. I felt the big man’s hard stare on me as I came along. Then he looked away as we began to make closer eye-contact, as if to maintain his authority. ‘I am sorry,’ I said. ‘I was told …’ ‘What’s your name?’ he demanded. He was indeed a big man. I told him my name. ‘Well, Mr McNeill,’ he replied having misheard, ‘my name is Michael and I am the bailiff here. This is private water.’ Perhaps I wouldn’t make it to St Kilda after all? Perhaps I’d be up before the bench come Monday.  ‘Fishing for trout are you?’ he asked. I said I was. ‘Well this is salmon and sea-trout water, part of the river system, a class B water… Did you catch any?’ He studied my face closely. ‘No,’ I said, ‘no.’ ‘Well, of all the hundred lochs here you picked the only one you’re not allowed to fish,’ he smiled at last, a little. Then the two escorted me back to the road. As we went I told them the purpose of my trip. ‘Were you ever on St Kilda?’ I asked. ‘No,’ said Michael, ‘but my wife was – the worst sea-crossing of her life . . .’  ‘A man I met in Steornabhagh,’ I launched out, ‘told me his father had been there, for a wedding. The minister went out with them on the boat.’  ‘I knew a man was married there six years ago …’ said Michael at once. We both guessed it was possibly the same wedding. ‘Yes, he married, and then he went to Australia. A Lewis man …’ I shook his hand. His silent assistant smiled a quick unofficial smile and Michael wished me a happy holiday. I put away my gear and drove for Tairbeart.

That afternoon I took the narrow winding way to Hushinish, and on the Sunday rose early to go spotting for a golden eagle at Sròn Scourst, along the track to Bogha Glas, by Loch Scourst. There is a hide near the pass there, but I don’t like to be served up ‘Nature’ in that way, and I went off piste and lay among the heather, staring skyward for an hour or so, but nary a sign of a golden eagle. I said to myself, you’ve got as much chance of seeing one as you have of going to St Kilda. Then almost as soon as I had the thought, there the eagle drifted out above the skyline, high above the ridge, not a wing-beat but once or twice a slight closing and opening of the wings, and then away it sailed out of sight over the rocks. An omen indeed. I had first seen a golden eagle as a boy in the OBSERVER BOOK OF BIRDS and never saw one since, beyond the covers of a book or on TV, until that moment. My binoculars brought it nearer but not near enough. Still, what better sign?

Later that day, climbing to the ridge and back down again, as you will see in the poem below, I saw a mountain hare, in two-tone transition, and found a red-deer antler in deep heather. What better signs? But it was not to be. The wind turned southeasterly, the seas cavorted, we would not reach St Kilda on either of our two possible days. On the first possible day my new friends and old (Gordon Campbell and Mary) saw two golden eagles. Surely promising for the next day? But not so. I tried to make out that not sailing to St Kilda was as rich a theme as making landfall there on Hirta. But little by little disappointment prevailed and for me persisted despite the good company I found myself in: and the music and song of John Peppard and of George Thomas; and a retreat to Carol Boyd’s neo-Scottish Laird’s hoose, Crionach, designed by Ian Begg, on the shores of Loch Snizort Beag, on Skye, where the hospitality, haggis and malt kept (some of) us up beyond the early hours into the incoherencies and follies of 4am (the place is up for sale, a snip for £750,000 – what an upmarket hotel it would make).

On Not Sailing to St Kilda

The windows shut against the weather,
I climbed the hill through bog and heather.

I saw a golden eagle and a mountain hare
And found an antler of a deer.

I walked along Hushinish shore
And watched a gannet plunge down ice-cold air.

The dream of sailing to St Kilda
As I had dreamt it months before.

My friends are of less melancholy disposition. They tell me we are already on for May next year . . . weather permitting.

NOTE:
‘The Raw and the Cooked Collage’ from Spain by Ester Conrat, devotee of Archipelago, for the benefit of those of you ‘in the know’.