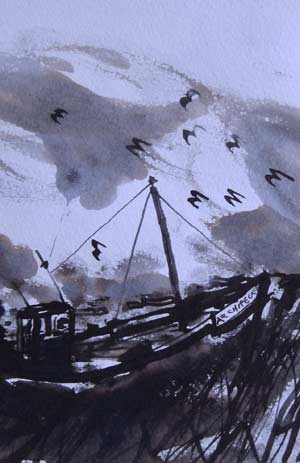 So now the good ship Archipelago makes headway into the blogosphere, uncharted waters for her, beyond the Seven Seas – the Eighth Sea. If water is the word, which it is not, except for the tear in my eye as I wave the shore goodbye. O terra firma! When shall we two meet again? The experience reminds me of the blackest December day there ever was in my notebook. I was out on Galway Bay aboard our mother ship the immortal Naomh Eanna in 1968. The rain fell so hard it seemed to rise back again in a stratospheric ‘double wet’ – a phenomenon described, on a smaller scale, in Katherine Rundell’s ‘Bate’s Creed’ (Arch 4). It fell and rose in towering shrouds of suffocating rain and seemed to reach its darkest intensity just as news came through from the bridge that Apollo 8 had orbited the moon. I had never seen such a black day at sea – dark, dark amid the blaze of noon indeed. It felt like the end of the world, not, as it was, the beginning of a new age in the history of human endeavour.

In an introduction he has written for the catalogue to an exhibition of recent work by Kurt Jackson (Cork Street, London – 15 November 2011 – 26 January 2012 – essential viewing if you can get there), Robert Macfarlane speaks of not ‘life history’ but ‘life geography’. It is the term for much about Archipelago, its beginnings and origins, and future. I find I am currently in the process of attempting to trace those beginnings and origins, on two fronts: one in preparing for the Edinburgh publisher Birlinn (for publication in 2012) an edition of my father’s first novel – Wigtown Ploughman: Part of his Life – set in the Machars of Wigtownshire (McNeillie-land) and for me a founding world in my personal phantasmagoria, due North, directly up the Irish Sea from where I was born and grew up in North Wales; the other in connection with ARCHIPELAGO: THE DOCUMENTARY to be produced by PICTO Productions (of 17 North Main Street, Wigtown, DG8 9HL) under the direction of Shaun Bythell and Jessica Fox. I’ll report news of progress on this front as it evolves.

I am aware that the ‘blog’ as a genre should stimulate conversation and not just provide news. Among the things I want to air, once properly under way, are matters concerning place and landscape, the local v. parochial,  metropolitan v. provincial, centre and margin, deep time and present time – the politics of place, in short, as well as the aesthetics of place, the value and meaning of local attachment, and in the spirit of Tim Robinson’s ‘good step’ the possibility of ‘good work’ in the world. I think medium and message are involved here too.

As some of you will know, Clutag Press marked its 10th birthday on 11.11.11 with an event in Convocation House at the Bodleian Library in Oxford. There were readings by Clutag writers and poets, from work published in pamphlets and books – and in the magazine Archipelago, issue 6 of which was launched that evening. The artist Norman Ackroyd gave a startling, incantatory account of the archipelago, locating one point of his compass in his native Elvet in Yorkshire and extending it 300 miles to the north to describe an arc round the westerly edge of our terrain. Philip Lancaster sang unaccompanied from the repertoire of Ivor Gurney. (See the listing below.) The occasion was recorded and a podcast or Bodcast will be made available in due course. It was also filmed, providing footage and soundtrack for ARCHIPELAGO: THE DOCUMENTARY.

Clutag-Archipelago extends special, warm greetings to all those CAUGHT BY THE RIVER.