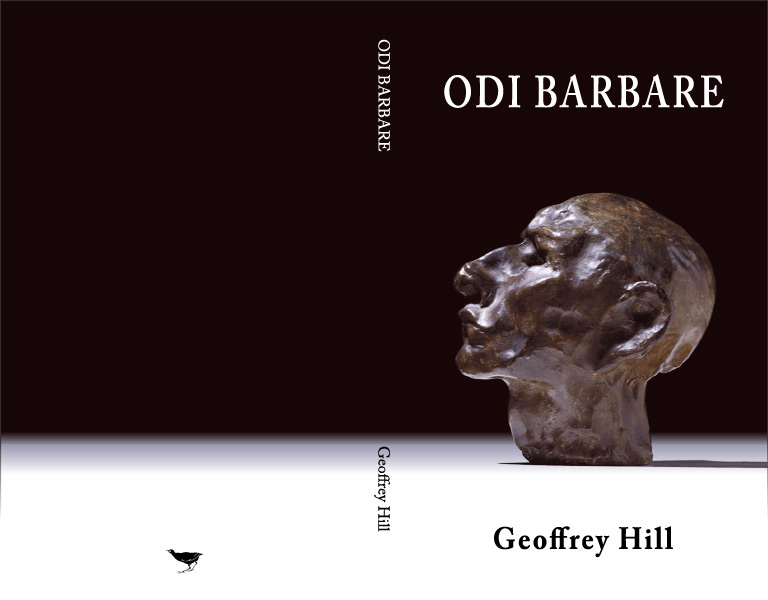 It’s 1 January 2012 as I write this. Geoffrey Hill has been knighted and we send our warm congratulations. We are pleased to have been involved in a successful campaign in his honour and to have written at some length to the appropriate mandarins. Sir Geoffrey is very dear to our hearts and much in mind as we work to bring his new book of poems ODI BARBARE to press. The poet takes fastidious interest in typography and production. Currently we are weighing the odds between Bodoni and Clutag’s more customary Garamond and the issue is the look of the italic in the former. What with one thing and another, it promises to be February at the earliest before we have stock. I am sure our customers will understand and forgive the delay. Meanwhile, here is a taster of the jacket (image generously provided by the photographer David Finn). The bronze ‘Head of an Idiot’ is by the sculptor Henri Gaudier-Brzeska (1891-1915), tragically killed at Neuville St Vaast, aged twenty-three and a sergeant in the French infantry, to which he was recruited aged twenty-two.

Mention of the Great War serves to prompt me to announce that in the wake of our birthday celebrations last November we now plan to prepare a CD of Philip Lancaster singing, unaccompanied and accompanied, songs and settings by the English poet and composer Ivor Gurney (1890-1937; see also Archipelago 3).

ARCHIPELAGO – THE SEVENTH VOYAGE ON THE SEVEN SEAS

Apart from refitting and provisioning for Archipelago’s 2012 voyaging, we have this year to accommodate two crews – ‘spare everythings, almost, but a spare Captain and duplicate ship’ as Melville puts it in Moby Dick. I refer to: our crew of authors and artists, and our film crew. Making ARCHIPELAGO: THE DOCUMENTARY, as announced in our first blog, will take us this year to many ports of call, among them: Foula, Cape Wrath, Handa, Staffa, Ailsa Craig, Mull of Galloway, Innisfree, Clare Island, The Twelve Pins of Connemara, Aran, and Bere Island. Ever anxious to be of service, I have dug out from the bottom of my ink-well a 1968-1969 map of Inis Mór harking back to the days when I played my part as Árainn Playboy of the Western World in residence. Here it is, for your, I hope pleasurable, disorientation (can you spot the basking shark?). I also plan to visit Inis Mór in May to walk the island with Tim Robinson and have a date to keep on Colonsay. Once more we greet our friends CAUGHT BY THE RIVER and take pleasure in introducing them and all archipelagians (though you might well be ahead of me) to an exciting venture founded by Mark Cocker and colleagues: NEW NETWORKS FOR NATURE. I am particulary grateful to Mark and to Matt Howard of the RSPB for being in touch and look forward to future collaborations.

We sometimes forget that our tradition is rooted in long-established forms of networking, called Antiquarianism and Natural History, stretching at least as far back as Petrarch and the Renaissance, and notably, in the English tradition, to Gilbert White. I was reminded of this when my friend Angus Martin, poet and social historian, sent me the latest issue of THE KINTYRE ANTIQUARIAN AND NATURAL HISTORY SOCIETY MAGAZINE. We talk much in our uprooted condition of ‘local attachment’ and the authority of the local. The local is said to travel. If it does, it does so on the spot, and happens everywhere and is the product of particular forms of attention, including nostalgia. The real grounded thing is nowhere better practised than by Angus Martin and his colleagues in Kintyre. In the latest issue of their magazine you will find: social history, topography, and natural history (a butterfly report, observations on moths and insect life and bird species) of a kind exemplary and inspiring in its communal spirit. Angus Martin was a friend of the great poet George Campbell Hay (1915-1984). We owe him much for his devotion to the poet and to the world and times in which Hay’s extraordinary gifts were grounded. See for essential and highly enjoyable reading Angus’s Kintyre: The Hidden Past (1984) and The Ring-Net Fishermen (1981) both wonderful books.

HAPPY NEW YEAR to one and all and may 2012 be the best year in your lives to date. Don’t forget our seasonal special offer is still running.