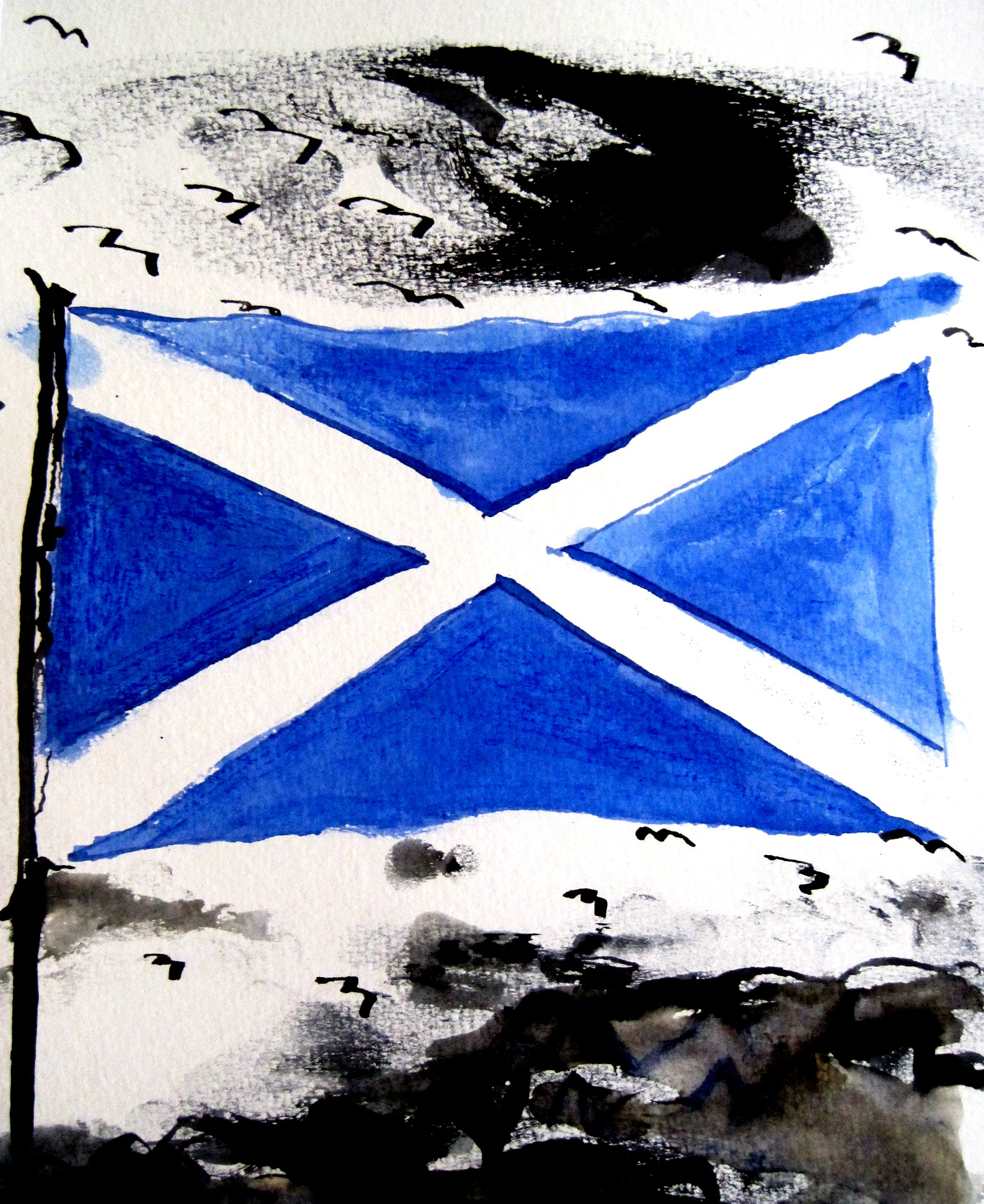 This year we’re flying the Blue Saltire at our masthead as the good ship ARCHIPELAGO jibes and takes the weather’s bearings, steadying sail flapping, bilge pump outlet spluttering, riding light drawing ‘eight and eight’ against the backdrop of a stormy sky. Meanwhile remembering Hugh MacDiarmid aboard the herring fisher Valkyrie (‘lying in his bunk and writing incessantly’) off the Shetlands in 1936, I lie in mine, reading A Book Around the Irish Sea: History without nations by David Brett. Published in 2009, this inspirational study in place and locality has an approach similar in spirit to our manifesto, first published in issue 1 (Summer 2007).

The magazine’s line in referring to an unnameable archipelago has been criticised for denying history. But this is in my view a mistaken response. If you remove the name from something familiar –Ireland, for example; the island of Scotland, Wales and England, or the United Kingdom– do what you will, meaning will rush in, as nature does upon a vacuum, and in the process pose new and raise neglected questions. History will rewrite itself before your eyes. This is the line David Brett pursues. I strongly recommend his book. (I put my hand up to any who know I was born and brought up next the Irish Sea…  swam my first strokes in its waters, made my first voyage upon it, fished in it, gazed up it beyond Eilean Mhannain longing for an impossible glimpse of the Machair of Wigtownshire … and protest my disinterestedness.)

A Book Around the Irish Sea sets the greatest store by the significance of the local and of place and resists generalisation in an exemplary fashion. It clearly derives some encouraging oxygen from the Good Friday Agreement.  I’ve been prompted to read it by the prospect of the upcoming symposium, at University College Dublin, called ‘Over the Irish Sea’ (26-27 April) organized by Dr John Brannigan. (I hope to see you there brandishing your copy of Brett’s pierage.)

Alex Salmond argues that an independent Scotland would inspire radical reassessment elsewhere in the archipelago. There can be no doubt that it would and no one knows what might unfold in such a process. On a cultural front and in a spirit of celebration ARCHIPELAGO has sought to inspire reassessments too, by insisting on the impossibility of naming the whole to the satisfaction of all concerned. At the same time it acknowledges and rejoices in the obvious existence of at least four distinct nations in the archipelago.

Incidentally, it is good to see Alex Salmond in a recent issue of the magazine Planet paying tribute to R. S. Thomas. This is particularly so for those of us inclined to believe, in Shelley’s phrase, that the poets are ‘the unacknowledged legislators of the world’ – a theme on which Thomas wrote in his poem ‘Song at the Year’s Turning’.

Events in Ireland since 1968 have inspired a rich counter-imperialistic cultural production. For deep historical reasons, the Irish have never been able to turn away from England and its language (they should have studied the Welsh, as Eamon de Valera once urged). Grievance and guilt make a strong cocktail and there have been rich pickings to be had from it among Albion’s ‘intelligentsia’ – her reading and theatre-going public – as well as Hibernia’s.

An inevitable want of purpose and meaningful direction has now set in, post-Good Friday, and who doesn’t feel at least a little ‘Irished-out’ at last? Now Ireland falls away, to regroup, for however long, tragically under significantly self-inflicted debt. As it does so, the Scottish Question, rides ever higher on the horizon.

Scotland since Hugh MacDiarmid at least has, it seems, no artistic interest or dependency quite akin to Ireland’s. The days of Burns and Scott are long gone. The road to England continues to throng with robustly ambitious and sharp-talking candidates for careers in political leadership, the legal professions, banking and business, journalism, and (as not in Dr Johnson’s day), football management. But in every other cultural respect of any comparable weight Scotland ignores England and vice versa. (Unless you think there’s something Scottish about the Edinburgh Festival.)

Might independence change any of this, in terms of Scottish literary and artistic production and archipelagic reassessment? It seems unlikely to me but answers on a postcard none the less, for the written word will triumph in the end.

A selection of MacDiarmid’s ‘Shetland Lyrics’ is included in These Islands We Sing: An Anthology of Scottish Islands Poetry edited by Kevin MacNeill and published last year by Birlinn. (Clutag and Archipelago’s Pàdraig Macaoidh is included in its pages.) It’s another book I have with me as I lie in my bunk riding out the times. As perhaps that devoted ocean-going yachtsman Mr Fred ‘Walter Mitty’ Goodwin is also doing – riding out the times, I mean, not reading Hugh MacDiarmid – even as I write and the luxury RBS cruise liner HUBRIS (aka ‘The Ship of Fools’) lists on the rocks, women, children and pensioners last. (May our courses never cross.)