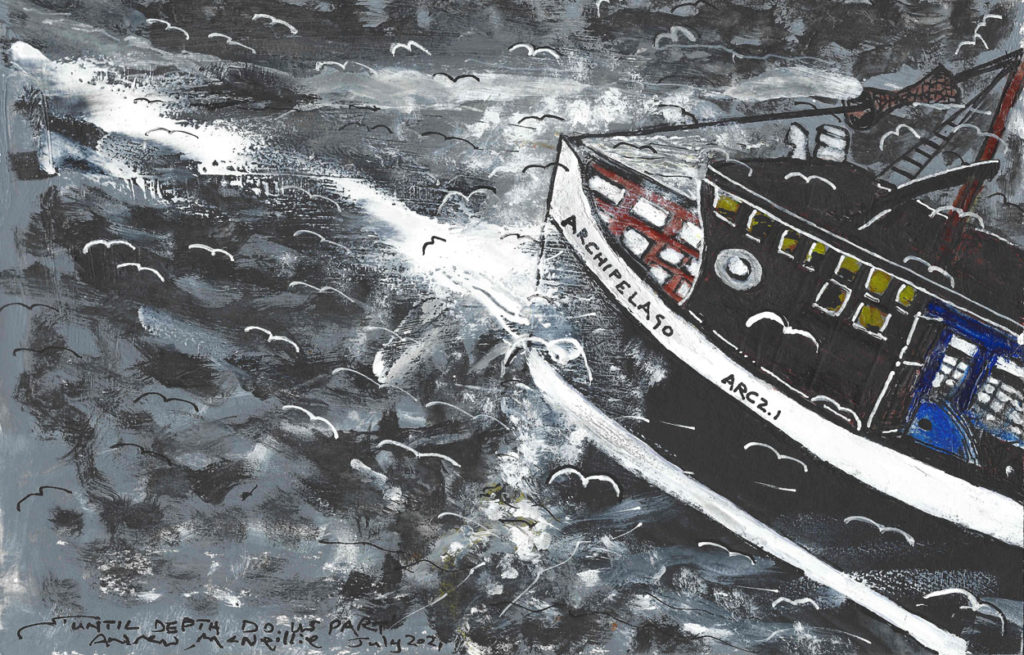 . . . . . . . . . . . .  lowered and lifted –
a canary in a mine-shaft fluttering
guttering but unquenched. Lead kindly
as she wrangles and haggles for passage
through wheeling collisions of light
flashed at death’s threshold, hell’s mouth,
heaven’s gaping gate, the narrow strait
and close scrape, Davy’s Locker and lamp
together, rocky seamark and landmark
vying on a soul’s darkest before the dawn,
gull and gale crying until depth do us part –
glass-eyed cod, haddock, monk, on ice –
the crew, lids propped, dying to turn in,
to drown in sleep until they wake
restless to put out again as much for
the sake of it as for pay’s lean packet.

Weather permitting … and restrictions of every conceivable kind allowing, we’re pleased to tell you we should at last glimpse the Harbour Light in time to bring our catch to market early in the new year. You will allow us, I know, a certain poetic licence in our promises. Just as I know you’ll be happy to hear Davey also, where you read Davy. It’s the nature of the undertaking, and makes sound sense. As to the ‘pay’s lean packet’, it would help the cause if you could place a pre-publication order for Archipelago 2:1, earlier rather than later in the day, through the website. We’ve been lying low for the past couple of years, dependant on income from our diminutive backlist, and our funds are at a low ebb. Do please help boost them by placing an order. It will make all the difference to our efforts and ultimately your pleasure.

Ireland’s leading independent publisher, the Lilliput Press’s Archipelago: A Reader edited by Nicholas Allen and Fiona Stafford is due for publication very shortly. At 578 pages, with a valuable amount of new material, it is a must-buy publication. You can purchase it via the Lilliput website. There you will read Robert Macfarlane’s inspiring endorsement:

Archipelago met and extended my own strong sense, nearly fifteen years ago now, that there was a need to turn the compass-rose of some story-telling and art in Britain and Ireland, away from the south and east and towards the north and west; away from the metropolis and towards rural and littoral margins. Much about McNeillie’s vision for Archipelago appealed to me and to others: its commitment to a paper-only existence; its recognition that no landscape (or seascape) speaks only in one voice — and the hospitality its pages therefore offered to Welsh, Irish and Gaelic-language work; and its wish to bring artists together with writers, and even musicians, to celebrate and commemorate the human and natural cultures of, especially, the Atlantic coasts. It formed an important twist in the braid of what has become known as ‘new nature writing’ in Britain and beyond, it lit up a tradition of coastal place-culture that goes back as far as early Celtic Christian poetry, and I feel fortunate to have been part of its journey.

All the more reason to sign up for the new series. It promises an extended geographical range and more environmentally determined focus while remaining none the less true to its original ground in the unnameable archipelago of Britain and Ireland.

Now the legendary figure of the Skipper is tugging impatiently at my sleeve ‘restless to put out again’, so I say farewell for now, and be sure to fare well.