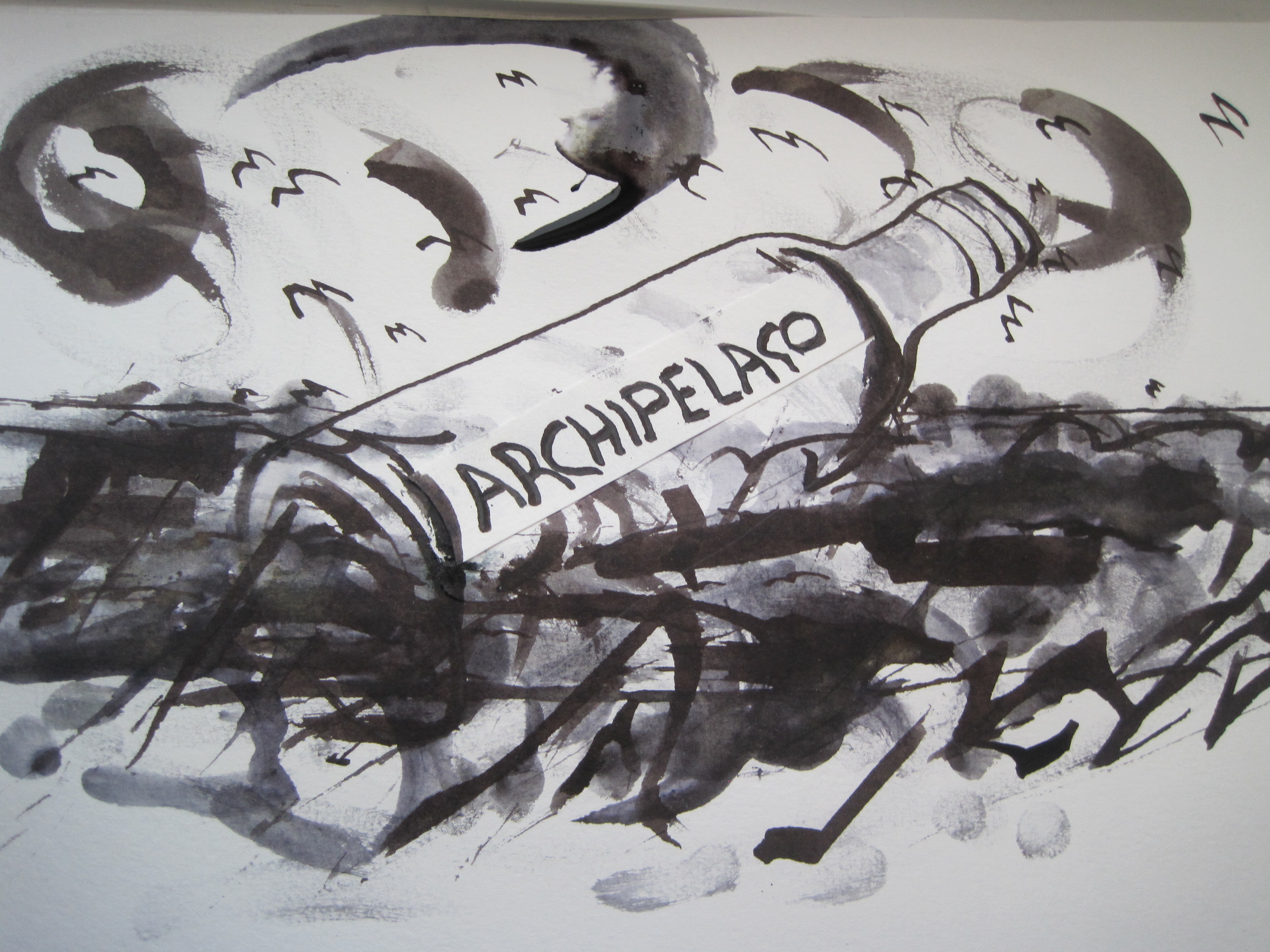 26 April 2012, Newman House, St Stephen’s Green: ‘Over the Irish Sea’ symposium hosted by University College Dublin – Jos Smith of Exeter University gives a talk about Archipelago, its preoccupations, its contributors, and the idea of ‘critical localism’ as a radical stay against globalism. It is inspiring to have the project of the ‘unnameable archipelago’ given serious attention at such an occasion and among so many high-powered scholars. Otherwise, of course, I try not to be too serious. I have bought a first edition of Tom O’Flaherty’s Aran Men All (1934) of which I’ve only read an excerpt before.

2 May 2012: I’m writing this beside the Atlantic at Port Bhéal an Dúin (Port of the Fort’s Mouth) near Gort na gCappall (Meadow of the Horses) the only village on the south shore of Árainn, one sometimes referred to by the islanders as ‘West Cork’. It is a hot day and after several in which the wind has most unusually sat in the east to north-east without let-up or shift beyond a point or two of the compass. Such sustained steadiness leaves the Atlantic shore relatively quiet. From Bothar na gCreag by which I came, I could see not just the cliffs of Moher but also the Brandon Mountains much farther south. There have been showers and last night it pelted and blustered. I have been here with Tim Robinson. He left yesterday. We walked together for hours, from shortly after our arrival on Sunday 29 April by the 1pm ferry from Ros an Mhíl in Connemara. It was his first return for eight years, he thought, possibly more. I’m not sure it isn’t a little longer, for he had not seen the harbour works, now just about completed. They have transformed Cill Rónain, the island’s capital. They represent Celtic Tiger money well spent and now to be had no more. I have been coming back since 1999, once or – more often than not – twice a year. Apart from the harbour and the fuel and waste disposal depot on the Low Road, nothing has altered that much. Cill Rónain’s bars and immediate accommodations proclaim themselves more garishly than they used to. An anxiety that the new reservoir had drained An Turlach Mór dry once and for all proved unfounded. It is one of the richest and most bio-diverse sites on the island. There has just been very little rain. It doesn’t alter the fact that depot and reservoir might easily have been camouflaged to blend more discreetly into the landscape. ‘Don’t mention the buses, don’t mention the bicycles,’ one of the jarveys urged us. For my part, I won’t. For me the wonder of walking the island with the author of Stones of Aran was too great to bother with anything else, except perhaps the crowing of pheasants where once one might have heard in early May the corncrake. (We heard and saw cuckoos, as of old.) There are pheasants all over the island, madly introduced, I don’t know by whom, in the past ten years or so. Talk about aural pollution, they seem to mock the place. With each call I hear English rural evenings, round about a great estate, summoning up the shades of landowners whose forebears had a stake in oppressingIreland. As he should be, Tim is held in the deepest affection by the islanders, not least for his knowledge of the Irish language. ‘You search in Árainn for Árainn? O Traveller! / in Árainn itself, there is no room for Árainn’ – is not quite true, but certainly not in the company of Tim Robinson. He knows more about the island than all the islanders put together. Our walks by favourite routes to special venues were like living tutorials in place-lore and I will never forget the botanising, especially, in pursuit of elusive species – Limestone Bugle and Pyramidal Bugle which we could not find, because they flower in March and as they die down are all but impossible to trace. On the way to Dún Dúcathair we chewed on sea-spinach – as hot and peppery as water-cress, it leaves you  feeling as if you’ve had a full meal – and rock samphire too. But I will write about all this elsewhere, another time.

Tom O’Flaherty has also kept me company. He quotes an old island saying: ‘Is ío ma ní is buáine ná an duine’  – ‘There’s many a thing more lasting than a person’. He is a superb writer, no less than his brother Liam. I see that the O’Flaherty home in Gort na gCappall is currently up for sale, no price given. It ought to be bought for the Irish nation. There is a magnificent memorial to Liam O’Flaherty just across the road from it, so perhaps civil Árainn should rise to the occasion again.